a travel and outdoor blog

11 days of “nepali flat”, grubby guesthouses, stomach bugs, but also incredible mountain views to make up for anything many times. Himalayas, I will be back!

The trek could have started better. Covered in cold sweat, my heart racing and barely concious I half lay on the dusty bathroom floor , after my body has for the past three hours gone through all the superpleasent symptoms of food poisoning. Apparently lunch was bad.

I nevertheless got up at six the next morning, nibbeled at some chapati and then set off on the trail. I was not gonna let an upset stomach get in the way if what I came to Nepal for: to find the mountains.

And find them I did! It took some patience (six days of walking through the jungle and getting up at sunset because the chances of any view were best then), some sore legs turned into iron leg muscles (nepali flat became a running gag – the trail went straight up just to go straight back down again around the corner, and after an adventurous suspension bridge straigth back up again), a lot if indifference towards your sleeping arrangements (most guesthouses were supergrose), but on the fifth day we finally were rewarded in Tadapani with a morning view of Annapurna South. 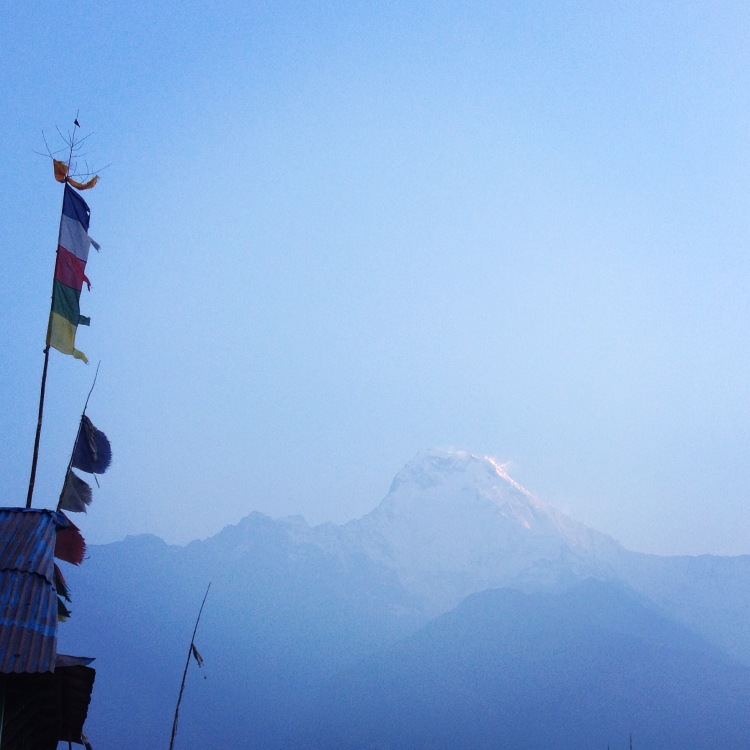 On the seventh day we emerged from the jungle into the more rugged alpine area of Annapurna sanctuary. 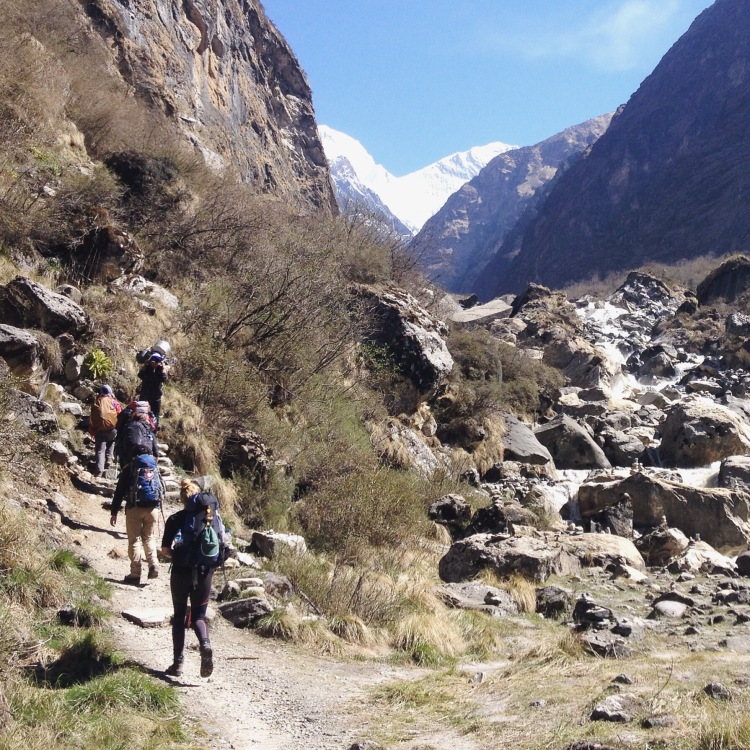 A first highlight we reached at 3700 meters: How beautiful was the view from Machapuchare Basecamp. I could have sat on the porch of our guesthouse forever just watching the everchanging weather, the steep slopes, the peaks of Mt. Fishtail and its neighbours emerging from the clouds and hiding again.

And just as impressive was the 360 degrees shot at mountain peaks we got up at Annapurna Basecamp. Annapurna South, Annapurna I and Hiunchuli all were glowing in the early morning sun, and countless prayer flags marked the mystic importance of this sanctuary in the middle of some of the worlds highest peaks. Forgotten was the hardship to get up here and my everbusy mind was already planning the next trip to these mountains… Annapurna Circuit, Mustang, Mt. Kailash, Everest Basecamp.. Bring it on!

The weather changes quickly up here: after a bright morning fog and clouds set the scene in the afternoon. 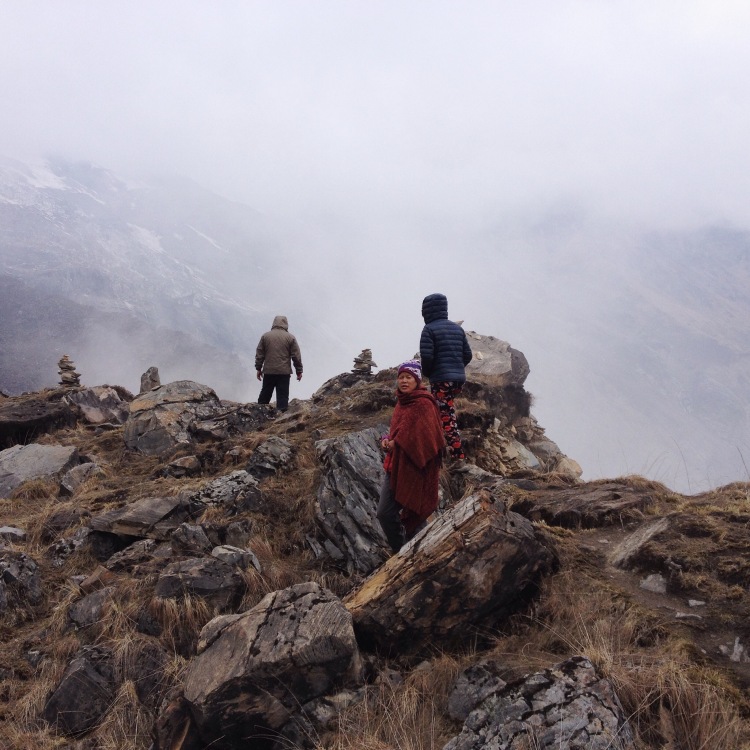 And it got even better: after we retreated back to Machapuchare Basecamp, and decided to spend the night there as to have another day in this beautiful terrain, all weathers broke loose: hail and rain and snow were torrenting down accompanied by lightning and thunder. From the safety of the guesthouse dining hall we watched this spectacular show all completed with snow avelanches raining down over the steep slopes of the mountains. What bliss it was to see this!

And how changed the landsacpe was the next morning:  after the storm everything is covered in a light layer of snow and looks so different to when we first came up here. 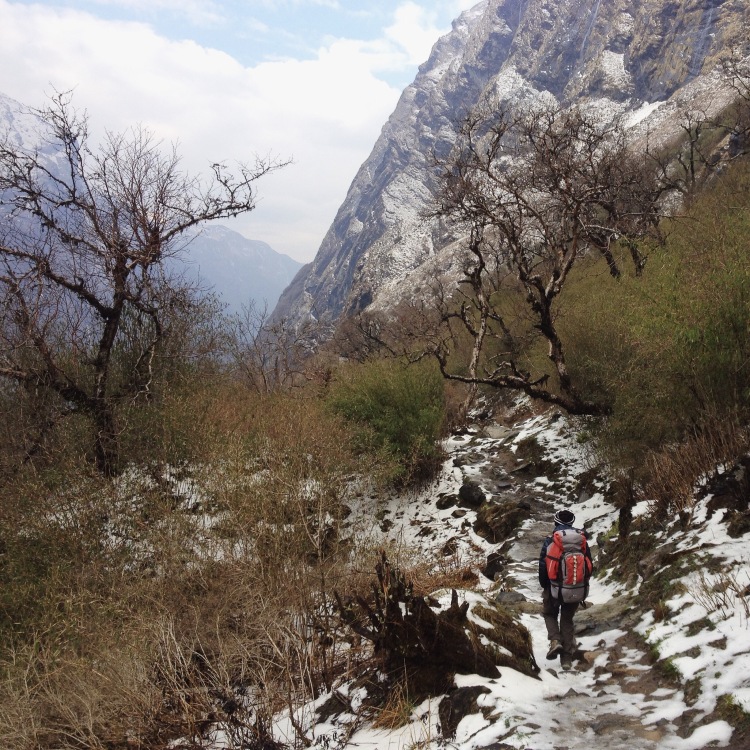 Quickly we made our descent back into the jungle, two nights stops and then it was done an we were back in busy Pokhara. 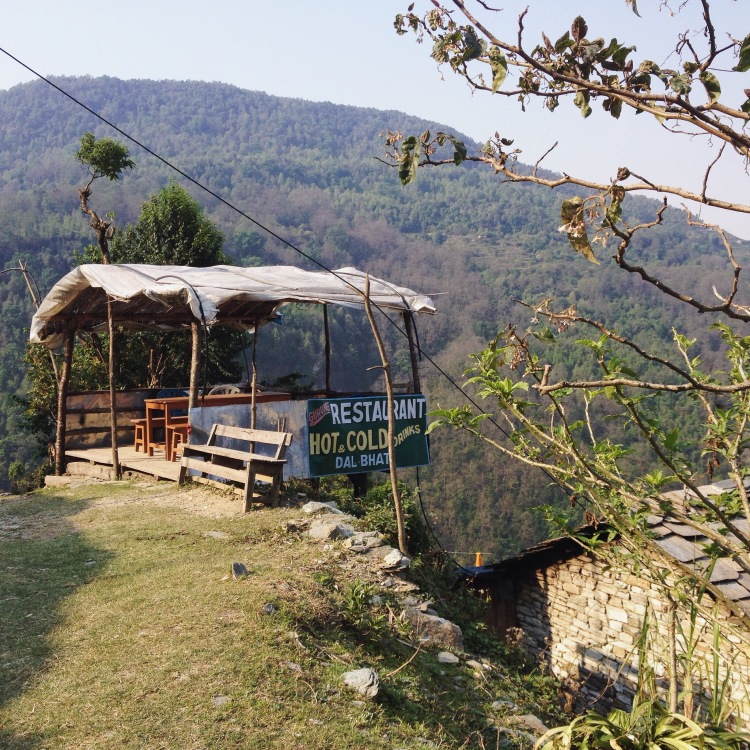